Elementals represent the 4 classic building blocks of magic ( and at one time considered to also be the creators of life), Air, Earth, Fire and Water.

They are powerful creatures and are beloved by Hermetic Mages.

Shamans can summon them but at a lesser chance of success.

( Either fed by the Blood of the Summoner, or his un/willing donors/sacrifices).

Some Mages, usually of an anti-social or evil nature, summon Corrupted Elementals, their reasons are many and varied, but common threads of hatred and jealousy seems to influence many.

These elementals are deadly and still a fairly unknown quantity.

These are the classic creatures of Evil, the tempters, the corrupters, the causers of grief and pain, and the source of much power in the world.

Demons are the foot soldiers of Devils and used by Sorcerors and other evil spellcasters as familiars, footsoldiers, assassins, etc.

Devils are the Greater Demons and each is unique, they need to be summoned to Earth, BUT, can't stay here long, generally summoned to aid a minion or to fulfil their own strange designs, they can cause great havoc in a short period of time.

Daemodand is a special case. These are the Evil Spirits that create Vampiric Creatures and are generally summoned only by another of its kind to inhabit a body of one that has fallen to the seduction of evil.

There are too many types of Demon, Devil and Daemodand to list, but below are a few of the more common types:

You can also read our article on demons and demonic-spirits, for protection against such elementals.

​Angels and other Celestial Beings

We personally come in to contact with conjuring these beings ourselves,  either before an investigation in our prayers for protection, or invoking the Arch Angels if we are involved or assisting with an exorcism or a cleansing.

When Magic returned to the World in 2020 the Catholic Church denounced it as heresy in the eyes of God,

The church claimed it was tricks by neo-pagans to discredit the "Word of the Lord".

Although the Church denounced it, that was until Cardinal Mark Shapiro of Los Angeles claimed to have spoken to the Arch-Angel Michael and announced that magic was given as a gift to mankind from GOD.

However several of the Angelic beings of Judaic/Christian Lore do exist, though they are not letting on in what capacity.

The 4 Arch-Angels are the guides and protectors of the Realms of Reality, but that is about all anyone has found out about them, reports of Seraphim and Cherubim are plentiful and have been documented, but again they are a mystery.

You need to understand in the paranormal, that, Elemental's are not of our world, they have never "Lived" as you and I are.

The elemental is conjured from one of the four elements mentioned above.

Once an elemental has been conjured, it is extremely difficult if not impossible to remove.

The difference Between a Pentacle and Pentagram

The Pentagram is a symbol for spiritual shielding and ethereal world intelligence.

It is also a symbol of the dominance of mind over the elements. In fact, it makes the bad spirits and other negative elements powerless when faced with this symbol while on the other hand, drawing the good spirits.

Those who have this symbol have infinite possibilities at their disposal, meaning you may choose to use or not to use this symbol.

​The Pentacle is a kind of amulet or talisman used in traditional magical evocations and in some Neopagan magical traditions such as Wicca, alongside other magical tools.

It represents good and pure and white magick, which symbolizes light and love.

First, it symbolizes the directions of North, South, East, West and the Spirit.

Second, it symbolizes the elements of Earth, Water, Air, the Spirit and the divine.

Lastly, it symbolizes the God and the Goddess.

If encased within a circle, it means wholeness and unity of all quadrants and the elements and our ultimate love for Nature.

In addition, it is used as a disc placed on the altar for protection while banishing negative energies and auras.

Both the Pentagram and the Pentacle are two of the most powerful symbols in the world of Magic and can be used for protection as nothing can compete with the absolute protection that these symbols can give you.

You may use them for keeping negative energies, evil spirits, and demons out during your rituals and spell casting, while you at your most vulnerable.

The upside down pentagram is not exclusively Satanic.

In fact, there are some Wiccan covens that use the inverted pentagram as a way to denote ranking.

It’s just the Satanists have adopted it and rarely used by Wiccan covens at present.

Due to this link between the inverted Pentagram and Satanists, it is more keen to use the Pentacle, making it more approachable and less prone to misunderstandings.

There are also other benefits of using Pentacle such as;

If carved from wood, the Pentacle is linked to nature and the natural world;

If made from gold, it boosts and enhances mental clarity, energy, and invokes wisdom;

If made from silver, it will serve as your link to the Moon and heightens your psychic senses and abilities.

The Pentacle is also used for focusing and directing energies in Magick.

If placed outside your residence, the Pentacle will protect the house and everyone who lives in it.

In addition, it provides you with the power to command and control the forces who are seeking to harm you. 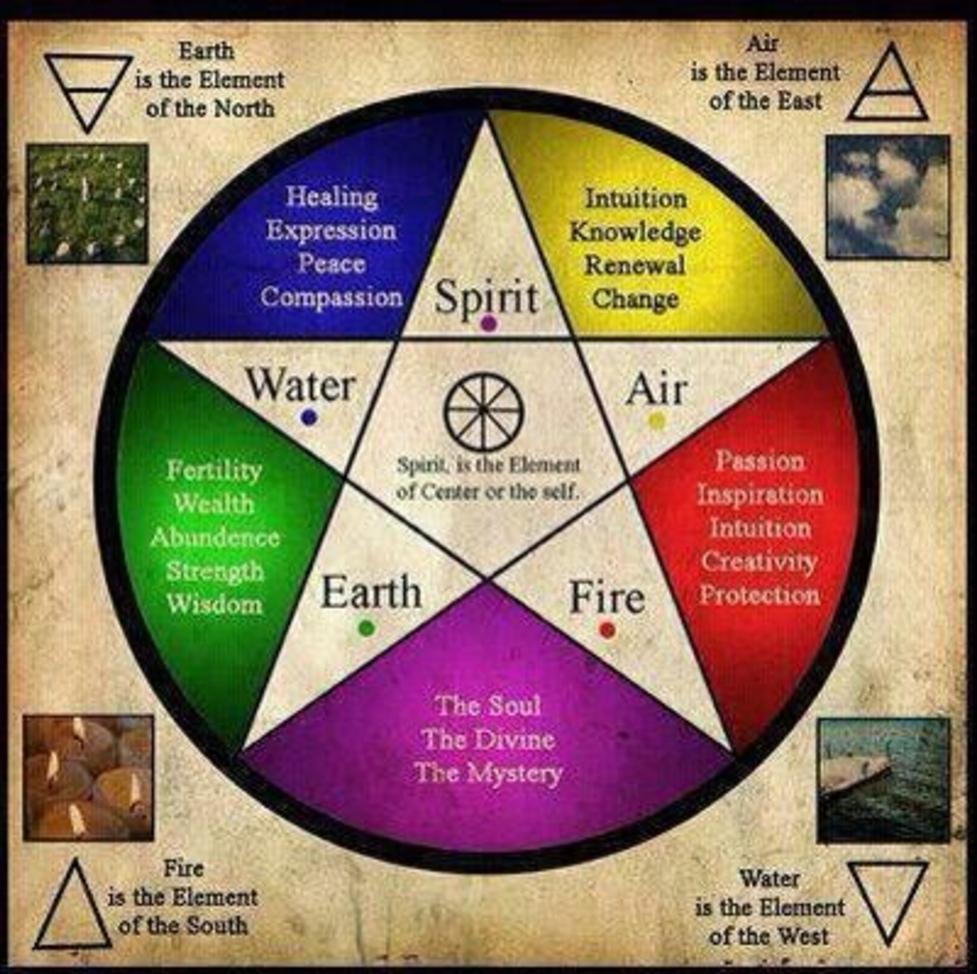 According to Paracelsus and his subsequent followers, there are four categories of elementals, which are:

These correspond to the four Empedoclean elements of antiquity:

The following is his archetypal being for each of the four elements:

Gnome, being of earth.

Undine, being of water.

Sylph, being of air.

Salamander, being of fire.

His fundamental classification scheme on the first page of Tractatus II of the Liber de Nymphis is based on where the elementals live, and he gives the following names:

Of the names he used, gnomus, undina, and sylph are all thought to have appeared first in Paracelsus' works, though undina is a fairly obvious Latin derivative from the word unda meaning "wave."

In De Meteoris he referred to the elementals collectively as Sagani.

He noted that undines are similar to humans in size, while sylphs are rougher, coarser, longer, and stronger. Gnomes are short, while salamanders are long, narrow, and lean.

Gnomes, for example, can move through rocks, walls, and soil.

Sylphs are the closest to humans in his conception because they move through the air like we do, while in the fire they burn, in the water they drown, and in the earth, they get stuck.

Paracelsus states that each one stays healthy in its particular "chaos," as he terms it, but dies in the others.

Paracelsus conceived human beings to be composed of three parts, an elemental body, a sidereal spirit, and an immortal divine soul. Elementals lacked this last part, the immortal soul.

However, by marriage with a human being, the elemental and its offspring could gain a soul. (Remember this sentence for reference later on with demons).​

FOR MORE EXPLANATION OF THE DIVINE MAGICAL PROPERTIES of THE PENTAGRAM,

READ OUR IN DEPTH ARTICLE ON THE GOLDEN RATIO.

Q. What does it mean to Evoke something?

​A. To call up; cause to appear; summon: to evoke a spirit from the dead.

Q. What does it mean to invoke something?

​A. To call for with earnest desire; make supplication or pray for: to invoke God's mercy. to call on (a deity, Muse, etc.), as in prayer or supplication.

Q.  What is the difference between invoke and evoke?

A. Invoke and evoke both stem from the Latin vocare, meaning "to call."

Invoke means "to call upon."

Evoke on the other hand means "to call forth."

Q. How do you invoke the Holy Spirit?

Just make sure you are sincere and believe in your heart that Jesus Christ is our Lord.

Q. What does invoking the spirit mean?

A. In some religious traditions including Paganism, Shamanism and Wicca, "invocation" means to draw a spirit or Spirit force into one's own body and is           differentiated from "evocation", which involves asking a spirit or force to become present at a given location.