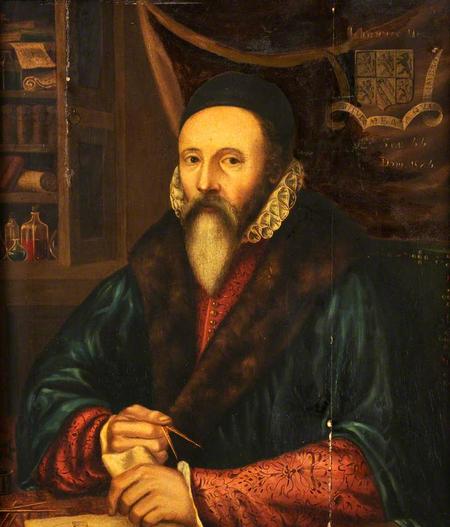 This painting of John Dee performing an experiment for Queen Elizabeth I originally included the polymath standing in a circle of skulls, a possible reference to his interest in the occult.

The halo of skulls was found in an X-ray analysis of the Henry Gillard Glindoni painting, which is part of an exhibit on Dee, known as "the Queen's Conjurer," at the Royal College of Physicians in London.

Experts have said they did not know why the skulls would have been painted out, but the fact that they were reveals some of the controversy surrounding Dee.

"Glindoni had to to make it look like what we now see, which is august and serious, from what it was, which was occult and spooky," 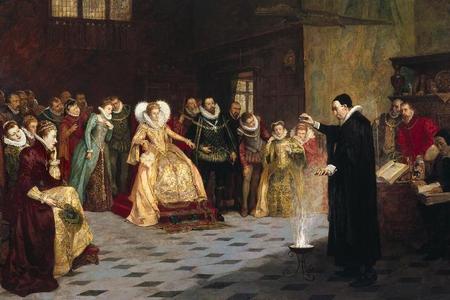 A mathematician, cryptographer, astronomer and scholar who advised Queen Elizabeth 1, navigators on trade routes, and traveled. He also was known for an interest in the occult and alchemy, and said he talked to angels.

Dee alternately is known either as a spy for Queen Elizabeth (who may have inspired James Bond) or as a heretic who was confined to house arrest by Queen Mary Tudor for sorcery.

In addition to Glindoni's painting (above), the exhibit at Royal College includes "magical objects" he may have used to talk to angels and 40 of the 100 volumes of Dee's library the college holds. Dee said he had more than 3,000 books and 1,000 manuscripts in his personal library.

English mathematician, natural philosopher, and student of the occult.

Dee entered St. John’s College, Cambridge, in 1542, where he earned a bachelor’s degree (1545) and a master’s degree (1548); he also was made a fellow of Trinity College, Cambridge, on its founding in 1546. Dee furthered his scientific studies on the Continent with a short visit in 1547 and then a longer stay from 1548 to 1551 (both times to the Low Countries) under the mathematician-cartographers Pedro Nuñez, Gemma Frisius, Abraham Ortelius, and Gerardus Mercator, as well as through his own studies in Paris and elsewhere. Dee turned down a mathematical professorship at the University of Paris in 1551 and a similar position at the University of Oxford in 1554, apparently in hopes of obtaining an official position with the English crown.

Following his return to England, Dee attached himself to the royal court, offering instruction in the mathematical sciences to both courtiers and navigators. He also served as consultant and astrologer to, among others, Queen Mary I. The latter activity landed him in jail in 1555 on the charge of being a conjurer, but he was soon released. Following the ascent of Elizabeth I to the throne in 1558, Dee became a scientific and medical adviser to the queen, and by the mid-1560s he established himself at Mortlake, near London.

There he built a laboratory and amassed the largest private library in England at that time, which was said to number more than 4,000 books and manuscripts. He was as generous in making his library accessible to scholars as he was in assisting numerous practitioners who applied for advice.

Dee was intimately involved in laying the groundwork for several English voyages of exploration, instructing captains and pilots in the principles of mathematical navigation, preparing maps for their use, and furnishing them with various navigational instruments. He is most closely associated with the expeditions to Canada led by Sir Martin Frobisher in 1576–78 and with discussions in 1683 regarding a proposed but never commissioned search for the Northwest Passage. He was equally active in publicly advocating a British empire in General and Rare Memorials Pertayning to the Perfect Arte of Navigation (1577).

In 1582 Dee also recommended that England adopt the Gregorian calendar, but at that time the Anglican church refused to embrace such a “popish” innovation.

Dee’s scientific interests were far broader than his involvement in English exploration might suggest. In 1558 he published Propaedeumata Aphoristica (“An Aphoristic Introduction”), which presented his views on natural philosophy and astrology. Dee continued to discuss his occult views in 1564 with the Monas hieroglyphica (The Hieroglyphic Monad [2000], Monas hieroglyphica), wherein he offered a single mathematical-magical symbol as the key to unlocking the unity of nature. In addition to editing the first English translation of Euclid’s Elements (1570), Dee added an influential preface that offered a powerful manifesto on the dignity and usefulness of the mathematical sciences. Furthermore, as passionately as he believed in the utility of mathematics for mundane matters, Dee expressed conviction in the occult power of mathematics to reveal divine mysteries.

Perhaps frustrated by his failure to arrive at a comprehensive understanding of natural knowledge, Dee sought divine assistance by attempting to converse with angels. He and his medium, the convicted counterfeiter Edward Kelley, held numerous séances both in England and on the Continent, where the two traveled together—mainly to Poland and Bohemia (now the Czech Republic)—between 1583 and 1589. By all accounts Dee was sincere, which is more than can be said for Kelley, who may have duped him.

On Dee’s return to England, his friends raised money for him and interceded on his behalf with Queen Elizabeth. Though she appointed him warden of Manchester College in 1596, Dee’s final years were marked by poverty and isolation. He was long said to have died at Mortlake in December 1608 and to have been buried in the Anglican church there, but there is evidence that his death occurred the following March at the London home of his acquaintance (and possible executor) John Pontois.

It is almost certain that William Shakespeare (1564–1616) modeled the character of Prospero in The Tempest (1611) on the career of John Dee, the Elizabethan magus.