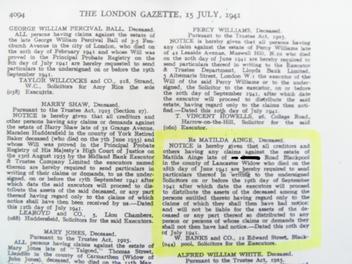 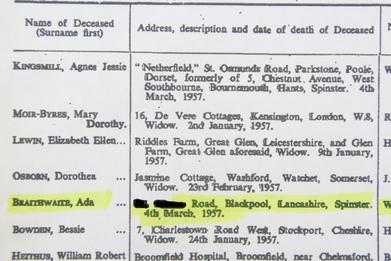 We have shown our video evidence of orbs above, so this got us in to investigative mode to try and find out who the past occupants of our home were, so we delved into the newspaper archives first and found two notices of deceased occupants.

The second person we came across was also found in the London Gazette in the notices of creditors dated 5th April 1957.

She was called Ada Braithwaite who died a spinster on 4th March 1957, we also dont know her age on death, we are still researching. We have censored our address in the pictures below. 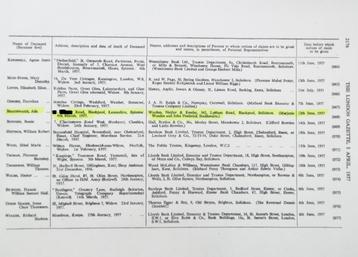 The first person we came across was found in the London Gazette in the notices of creditors dated 15th July 1941.

She was called Matilda Ainge who died a widow on 28th June 1941, we dont know her age on death, we are still researching, and trying to find her past husbands name as well. We have censored our address in the pictures below.

With this new information, we did a spirit box session using the SB7, settings on 100ms, forward sweep in the FM mode. We also recorded the session on an EVP recorder, and took still photographs, and managed to take photos of some amazing orbs, shown below, we took two photos in each area, and have also enlarged the orb for you to see more clearly, and so as to debunk insects.

I think you will agree, they are pretty impressive. Just click on the thumbnail to enlarge, then scroll through.

We bought a new DVR and camera system for our next investigation at 30 East Drive, and decided to test it out in our house first.

We had a suspicion our home was haunted, but was not expecting this much activity, this is just 3m 38secs of the best of the orbs in the first 1 hour of capture.

The part 1 video we produced gives an excellent  example of what flying insects look against the Spirit orbs we actually caught.

Part 2 of more footage of orbs on the stairwell of our haunted house, a rather special horse shoe shaped orb or that appears from knowhere 18 seconds into this clip, and again, with the moths flying around erratically compared to the graceful flight of spirit orbs that adds credibility to the existence of spirit orbs.