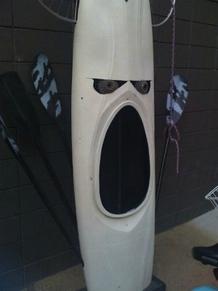 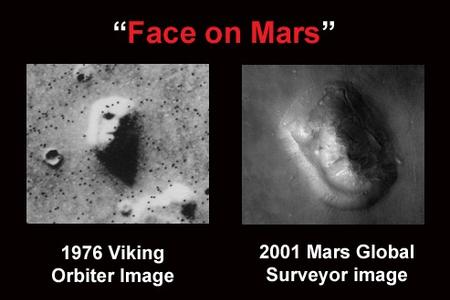 What is it about Mars?

Ever since NASA's twin exploration rovers landed on Mars (January 3 and January 24, 2004) and began beaming back images, people claim to have seen all manner of things on the red planet, including as intimated in the following video, a polar bear! 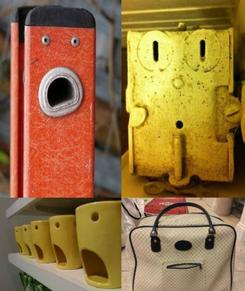 If all that you can see are vagina's, you seriously have snags!!!!

Below are 3 pictures of what we could see in everyday life as we go about our own business,

See a face or two? Assuming you did, the psychological phenomenon you are experiencing is known as pareidolia i.e. the perception of an ambiguous and random stimulus as significant.

One of the best-known examples of pareidolia is the "face on Mars", the famous NASA image taken in 1976 by the Viking 1 orbiter (satellite photos from a later NASA mission in 2001 shattered the illusion of the original image).

Chris French, Ph.D., is a professor of psychology and head of the Anomalistic Psychology Research Unit at Goldsmiths, University of London.

He is renowned for his research on the psychology of paranormal belief; particularly his work on non-paranormal accounts of ostensibly paranormal experiences (ESP, PK, psychic readings, psychic healing, alternative and complementary medicine, out-of-body and near-death experiences, astrology and other divinatory techniques, reincarnation, UFOs and alien abduction, ghosts and poltergeists, crystal power and dowsing etc).

A special advisor and former Editor-in-Chief of The Skeptic Magazine, the UK's foremost and longest-running sceptical magazine, Professor French is regularly called upon in the media to offer a psychological perspective on various paranormal claims. He is also a columnist for the Guardian’s online science pages.

Face perception is a very important human attribute. Our brains it would seem are hard-wired to help us recognize the presence of a face from birth; newborn babies, for instance, will automatically focus attention towards any face-like pattern.

This deep-rooted face detection system remains operational throughout our lives. Let's see if we can trigger yours!

There are lots of examples of a random stimulus inducing religious pareidolia. Most notably, the toasted cheese sandwich purportedly bearing the image of the Virgin Mary which sold on eBay for $28,000!

So let's wrap this segment up.

To conclude this segment, when you are out investigating gaining your photographic and video evidence, whether you are hunting bigfoot, aliens/UFO's or the paranormal spirits, just because you are wanting to see what you hunt as evidence, keep your mind open to what it could be to what you think or want it to be, as there is a chance it can be explained as normal.

We love to get your feedback and thoughts on topics we cover at GITUK, please feel free to share our pages with the paranormal community. 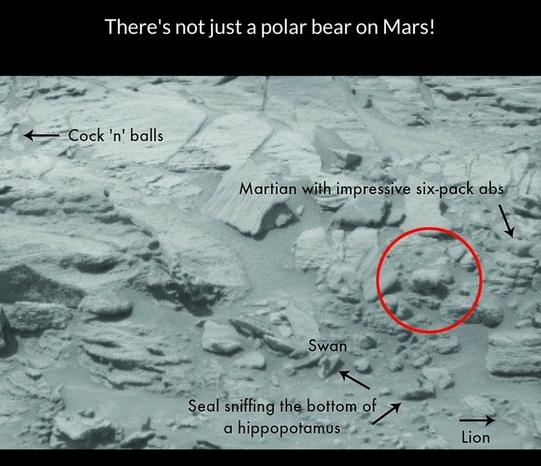 Some see what we discuss here at GITUK as controversial in the paranormal community, and they don't like to discuss topics like Paredoila, we are objective and we will debate any topic that is relevant to what we do in the paranormal world. Only by understanding a subject can you be 'Objective'.

"Why and how do we tend to see faces in objects that have constituent parts resembling those of a face? Is it because our brains are hard-wired to detect the presence of a face as quickly as possible, or is it a later cognitive construction or interpretation?"

Pareidolia is a type of apophenia, which is a more generalized term for seeing patterns in random data.

Some common examples are seeing a likeness of Jesus in the clouds or an image of a man on the surface of the moon.

Apophenia is the spontaneous perception of connections and meaningfulness of unrelated phenomena.

The term was coined by German neurologist and psychiatrist Klaus Conrad (1905-1961).

Conrad focused on the finding of abnormal meaning or significance in random experiences by psychotic people.

So we are now in a subject called 'Psychology' , a huge step and a jump from our world of 'Para-Psychology.

We are in the murky world of mental health, well being, and psychiatry.

You must all know or of heard about the infamous 'InkBlot Tests'?  or the official terminology 'The Rorschach Inkbot test'.

The Rorschach inkblot test, a very popular and some would say questionable method of psychological evaluation is a great example of applied pareidolia.

During the Rorschach test individuals are shown a series of inkblots and are asked to to say the first thing that comes to mind. Because the inkblot stimulus is ambiguous, it is claimed that the patient must impose his or her own interpretive structure on to the image, and in doing so they reveal their thoughts and feelings, some of which are unconscious and have been projected into the inkblot image, hence the term projective testing.

The Rorschach Inkblot test was not originally intended to be a projective measure of personality.

Instead, it was meant to produce a profile of people with schizophrenia (or other mental disorders) based upon score frequencies.

Rorschach himself was skeptical of his test being used as a projective measure.

Take the Rorschach test HERE and investigate your psychological personality.

Below are 3 examples of 'Ink Blot' pictures.

So from Psychology to what we do, Para-Psychology, and the buzz word on the street recently banded around by non-believers and sceptics to dismiss evidence is 'PAREDOILA', it's one word they use far too quickly that's quick to debunk and discredit photographic evidence from Paranormal Investigators,the word is almost used as a ridicule and in one word they can Poo Poo your evidence after a quick glance without actually studying what you have photographed. So never be afraid to post your photographic evidence, true paranormal investigators will give you positive feedback.

Now don't get me wrong, I'm not against sceptics, not every photo of the paranormal is paranormal, sometimes the belief that what you want to be there could influence you into believing that what you are actually looking at is a spirit body or face etc.


Do ghosts exist?Is there any evidence for the paranormal? With millions believing in paranormal phenomena, it must either exist or be explained by psychological factors. Chris French introduces the field of anomalistic psychology, which aims to provide non-paranormal, scientific explanations of the seemingly unexplainable. Dr Chris French is a true sceptic. Taking a negative stance on something that has no positive evidence, yet always open for positive evidence to prove his firm belief's wrong.

This is not to be confused with outing the evidence of the cheats and charlatans that blight our community.

In the name of psychological science, Dr Chris French decided to spend some time surveying the Martian landscape close to where the polar bear was spotted and guess what?