POWER & CHARGINGSBox is powered by a rechargeable battery.

To charge the device use the provided USB charging cable (WHITE) to connect to a USB power source. This could be a computer with a USB power, USB power strip or USB battery pack for quick mobile power.

When charging the flashlight LED will show red and will turn off once complete. To plug the device into an AC power outlet, you will need to use a USB to AC power adapter (not provided). When SBox is powered on you will see a battery icon to the left of the display indicating battery life.

If to be stored for any length of time, take the battery out of the SBox when storing.

Since the flashlight is always in a 'standby mode' even when the unit is off, it does drain the battery very slightly over time.

Given that, if your SBox is stored away with a full charge for some time it will come out with a drained battery.

When switching modes you will hear a verbal queue to indicate each mode as follows. It may take a moment to switch between modes.

SCANNING AM
This mode is used for conducting spirit box sweep sessions using the AM band.

LINE IN
This mode allows you to plug in an audio device to use the SBox as an external wired speaker.

You can use the provided 3.5 audio to micro-USB cable to connect another compatible audio device.

BLUETOOTH
This mode allows you to connect a Bluetooth audio device to use the SBox as an external wireless speaker.

PLAYBACK
This mode allows you to play recorded spirit box sessions and other audio files on the memory card or from a USB drive.

Press SCAN (13) to start and stop the sweep.

To change sweep direction: while the scan is stopped hold REVERSE (11) for 2 seconds to sweep in the reverse direction or hold FORWARD (15) to sweep forward. If a sweep is already active you must press SCAN (13) again to stop the current sweep and resume in the desired direction.

To change sweep speed (available only on firmware V1.3): press FORWARD (15) to make the scan faster or REVERSE (11) to make the scan slower. You will see a number display quickly on the screen "1-4". This indicates the speed where 1 is the slowest and 4 is the fastest. You can do this while sweeping or even when it's paused.

To record sweep or EVP audio you must first insert a micro SD card into the port at the top of the device (4). Make sure to face it in the proper direction to insert properly. It will click into place.

To record radio sweep audio, first, start the sweep in the direction you prefer.

Once the sweep has begun press RECORD (16). An ‘SD’ icon will appear on the screen to indicate it is recording to the SD card.

To stop recording press RECORD (16) again. Stop recording after each session to save the file properly. As soon as you stop the recording it will play the latest recording for review.

Whilst recording you can start, pause or change direction on the sweep as you wish.

To record EVPs or voice-only press MODE (17) to ‘Playback’ mode then press record. This will begin recording from a built-in microphone. You cannot use the radio sweep in this mode.

Remove SD card from the memory slot (4) and insert it into a computer using any micro SD card reader.
Plug SBox directly into a computer via the USB data port (8) using the provided USB cable (normal size USB on both ends).

To play audio files from the SD card press MODE (17) to ‘Playback’.

Press FORWARD (15) or BACK (11) to select a file. Sbox will play the audio file. Each file is indicated by a number in sequence.

To transfer or view the files on the SBox SD card plug the USB data cable (BLACK) into a computer. The SBox display will show 'PC' and a drive should show active on your computer momentarily.

Steps for updating your SBox with your prefered version:

Download the version file you prefer on a desktop computer or laptop. Once downloaded, you should find the file in your default downloads folder or desktop. The file is called 'jl_690x.bfu'.
Insert a Micro SD card into the SBox (max 32GB).
Turn the SBox on.
Plug the SBox into your computer via the black USB cable (male/male). The Sbox LCD display will show 'PC' when it is connected.
A new drive will popup on your computer.
Copy the downloaded SBox firmware file to the SBox SD card.
Unplug the USB from the SBox.
Eject the SD card from SBox and put it right back in.
The SBox will update on its own and reboot itself. The screen may show a few weird dashes while updating.

Once you hear 'SBox' again, it is now updated.

Plug the USB cable back into the SBox and remove the firmware update file from the SD card.

This is necessary to keep it from updating every time you access the SD card.
Remove the USB cable and start investigating with your updated SBox!

The guys at Ghoststop.com have produced a how-to video to assist you in updating your SBox, I have included this guide below.​

​We have added a new piece of kit to our arsenal of ghost detection equipment this year (2019/20) the S BOX Scanner + added sweep control made by ghoststop.com, the following text regarding this device is taken directly from the technical pages from the ghoststop.com website.

New Update added on (11/20/18): added sweep SPEED control if you already own an older version of this.

You can get the free upgrade from www.ghoststop.com

The SBox Ghost Scanner is a spirit box radio frequency sweep scanner and recorder for paranormal research. SBox includes many other features to aid in making your investigations easier while providing quality evidence documentation

The SBox is a NEW spirit box that has been specifically built for paranormal investigations with some added features we may need that our not found on other devices we currently use.

It is a compact and easy to use tool for communication with paranormal entities/spirits.

The SBox utilises radiofrequency sweeps (like the P-SB7 and P-SB11) to generate white noise from existing FM and AM bands which theories suggest may provide an entity/Spirit with the energy they need to be heard.

When this occurs you may hear voices or sounds coming through the static in their attempt to communicate.

The SBox allows you to use FM or AM band sweeps for potential communication with an entity/spirit.

You can now also control the speed and direction of the sweep at any time, forwards and backwards.

As an additional feature, the SBox will detect if something is attempting to come through during the sweep and will pause on that frequency for a moment more to allow more time for getting a message through.

This allows you the opportunity to hear more than one syllable to capture multiple words and maybe even a full sentence.

Record your ghost box sessions through a direct line and play back using the loud built-in speaker. You can also choose to record normal EVP audio without the radio sweep if you choose. Either option records directly to an SD card (available as an add-on). You can playback right on the device or take the SD card to your computer or any other SD card reading device. NOTE: a Micro SD card is REQUIRED for record and playback. These are available as an add-on above.

The built-in battery lasts for up to 6 hours of continuous use on a single charge. It can be recharged using any USB charger including a mobile USB battery pack for a quick boost. Carry it with a battery pack or plug it into a wall outlet for unlimited use. It's easy, quick and saves money on batteries.

Note: some functions eat up battery life. See specs for details. You can buy spare batteries to swap out with, Nokia models BL-5C are used in the device.

There's no need for an external speaker with this device. It includes a large, amplified built-in speaker made to be heard well even in a large room.

If you really want it louder, there is an audio output jack which you can attach to another audio device including headphones.

Grab a set of headphones when you want a more discreet session without interrupting other investigators.

SBox can also be used as a Bluetooth speaker when connected to another Bluetooth-enabled device.

The SBox has a red LCD lighted display. It is preferred to use red light when possible to help maintain the investigator's night vision.

The display also indicates battery life and status of the device which varies for each mode.

There is also a built-in white LED flashlight for when you need to shine a little extra light on a situation.

The SBox has been designed and built to EVOLVE.

As we learn, grow and adapt as investigators, so can this SBox.

GhostStop.com have built it with the ability to make software changes that you can download and update yourself based on preferences you feel work best for you. See the how-to videos ghoststop.com have produced above.

They are working on these based on YOUR FEEDBACK. So make sure you let them know what's good and what's not, and what you would like it to do.

They will be available for download here with instruction on how to easily update your SBox.

You can click here for DIRECTIONS on how to update your SBox with the version you prefer. 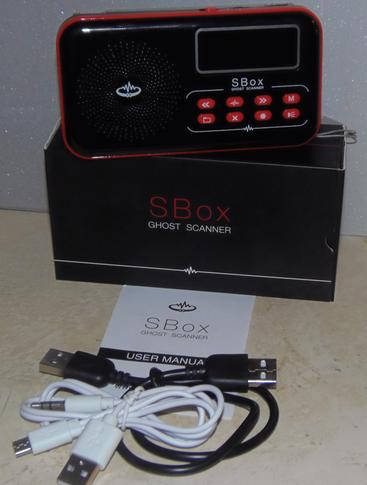 GITUK do not receive any kickback of any kind whatsoever from GhostStop.com.

We buy all of our own gear from the supplier, and we write this article without favour.

We are not endorsing this product, merely providing an independent review and descriptive information on this piece of equipment we use during our investigations

The SBox can also be used as a wireless speaker for a smart device like a phone or tablet.

To use the SBox as a speaker you must first initiate a Bluetooth connection between both of the devices.

Turn your SBox on (2).
Press MODE (17) until you hear 'Bluetooth'.
Turn on the Bluetooth enabled device you wish to use as the audio source (ie phone, tablet, watch, etc.).
Make sure Bluetooth is turned ON on your device and searching for Bluetooth devices.

Going about this is different on every device. You will have to see the manual of your own device on how to do this.
SBox will be discoverable and show up as 'BT_SDK_0'. Connect to that. Once connected you will hear a chime.
Play something from your audio source and you will hear it through the SBox speaker. Make sure to turn the volume up.

The distance Bluetooth will work varies and is dependent on the source device signal strength. 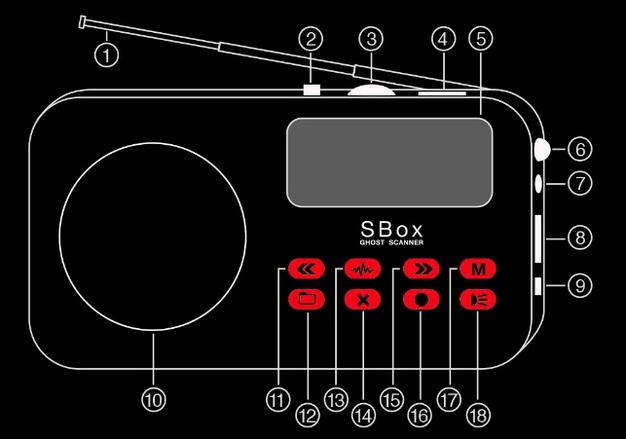