The golden ratio properties of a regular pentagon can be confirmed by applying Ptolemy's theorem to the quadrilateral formed by removing one of its vertices.

If the quadrilateral's long edge and diagonals are b, and short edges are a, then Ptolemy's theorem gives b2 = a2 + ab which yields.

An example of where the Golden Ratio and Ptoemy's Theorum is used can be seen in the work by John Dee and theSigillum Dei and how horoscopes are predicted using the same ideology.

Leonardo da Vinci's illustrations of polyhedra in De divina proportione (On the Divine Proportion) and his views that some bodily proportions exhibit the golden ratio have led some scholars to speculate that he incorporated the golden ratio in his paintings.

Although the Vitruvian Man is often shown in connection with the golden ratio, the proportions of the figure do not actually match it, and the text only mentions whole number ratios.

The 16th-century philosopher Heinrich Agrippa drew a man over a pentagram inside a circle, implying a relationship to the golden ratio. 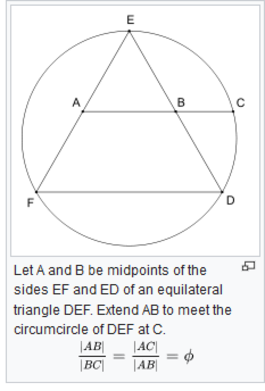 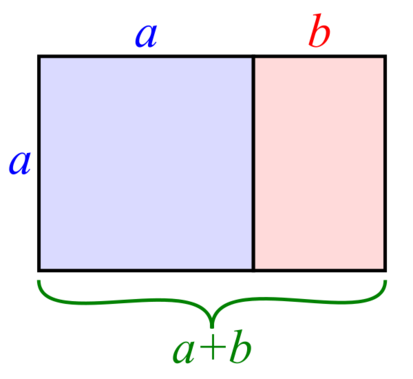 The Golden ratio became of interest to us, as it has been used since ancient times, and is well documented in history, and since writing articles on the paranormal subjects,Sigillum Die, pentagrams etc, you wonder if there is some mystical event that can be conjured up by using mathematics as an enabler? Zak Bagans mentions the Golden Ratio in "Ghost Adventures ser10 ep10 Loftus Hall."

In mathematics, two quantities are in the golden ratio if their ratio is the same as the ratio of their sum to the larger of the two quantities. The figure on the right illustrates the geometric relationship. Expressed algebraically, for quantities a and b with a > b > 0, 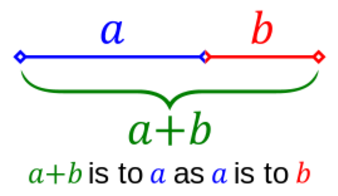 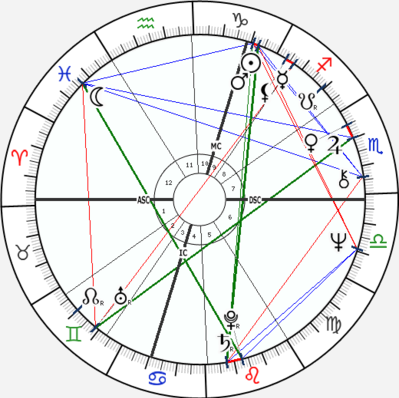 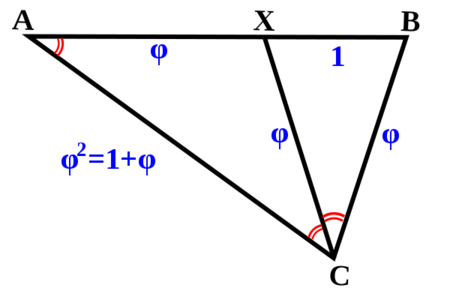 George Odom has given a remarkably simple construction for φ involving an equilateral triangle:

If an equilateral triangle is inscribed in a circle and the line segment joining the midpoints of two sides is produced to intersect the circle in either of two points, then these three points are in golden proportion.

This result is a straightforward consequence of the intersecting chords theorem and can be used to construct a regular pentagon, a construction that attracted the attention of the noted Canadian geometer H. S. M. Coxeter who published it in Odom's name as a diagram in the American Mathematical Monthly accompanied by the single word "Behold!"

The golden ratio plays an important role in the geometry of pentagrams.

Each intersection of edges sections other edges in the golden ratio. Also, the ratio of the length of the shorter segment to the segment bounded by the two intersecting edges (a side of the pentagon in the pentagram's centre) is φ, as the four-colour illustration shows.

In all of them, the ratio of the longer side to the shorter side is φ.

The acute triangles are golden triangles.

The golden triangle can be characterized as an isosceles triangle ABC with the property that bisecting the angle C produces a new triangle CXB which is a similar triangle to the original.

Suppose XB has length 1, and we call BC length φ. Because of the isosceles triangles XC=XA and BC=XC, so these are also length φ. Length AC = AB, therefore equals φ + 1. But triangle ABC is similar to triangle CXB, so AC/BC = BC/BX, AC/φ = φ/1, and so AC also equals φ2. Thus φ2 = φ + 1, confirming that φ is indeed the golden ratio. Similarly, the ratio of the area of the larger triangle AXC to the smaller CXB is equal to φ, while the inverse ratio is φ − 1 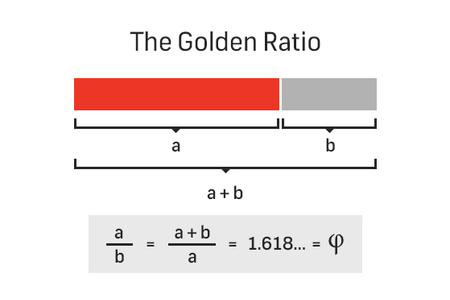 Line segments in the golden ratio

The golden ratio has been claimed to have held a special fascination for at least 2,400 years, although without reliable evidence.

According to Mario Livio:

Some of the greatest mathematical minds of all ages, from Pythagoras and Euclid in ancient Greece, through the medieval Italian mathematician Leonardo of Pisa and the Renaissance astronomer Johannes Kepler, to present-day scientific figures such as Oxford physicist Roger Penrose, have spent endless hours over this simple ratio and its properties.

But the fascination with the Golden Ratio is not confined just to mathematicians. Biologists, artists, musicians, historians, architects, psychologists, parapsychologists, paranormal investigators and even mystics have pondered and debated the basis of its ubiquity and appeal.

In fact, it is probably fair to say that the Golden Ratio has inspired thinkers of all disciplines like no other number in the history of mathematics.

Ancient Greek mathematicians first studied what we now call the golden ratio because of its frequent appearance in geometry.

The division of a line into "extreme and mean ratio" (the golden section) is important in the geometry of regular pentagrams and pentagons.

A straight line is said to have been cut in extreme and mean ratio when, as the whole line is to the greater segment, so is the greater to the lesser.

Euclid explains a construction for cutting (sectioning) a line "in extreme and mean ratio" (i.e., the golden ratio).

Throughout the Elements, several propositions (theorems in modern terminology) and their proofs employ the golden ratio.

The first known approximation of the (inverse) golden ratio by a decimal fraction, stated as "about 0.6180340", was written in 1597 by Michael Maestlin of the University of Tübingen in a letter to his former student Johannes Kepler.

Since the 20th century, the golden ratio has been represented by the Greek letter φ (phi, after Phidias, a sculptor who is said to have employed it) or less commonly by τ (tau, the first letter of the ancient Greek root τομή—meaning cut) 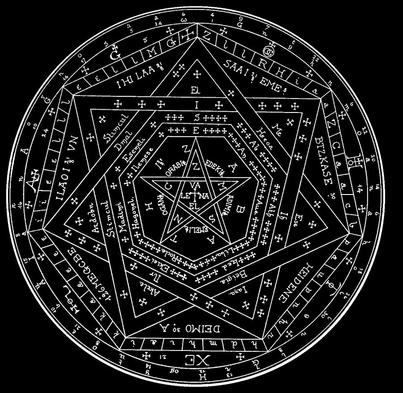 Some twentieth-century artists and architects, including Le Corbusier and Dalí, have proportioned their works to approximate the golden ratio—especially in the form of the golden rectangle, in which the ratio of the longer side to the shorter is the golden ratio—believing this proportion to be aesthetically pleasing.

The golden ratio appears in some patterns in nature, including the spiral arrangement of leaves and other plant parts.

Mathematicians since Euclid have studied the properties of the golden ratio, including its appearance in the dimensions of a regular pentagon and in a golden rectangle, which may be cut into a square and a smaller rectangle with the same aspect ratio.

The golden ratio has also been used to analyze the proportions of natural objects as well as man-made systems such as financial markets, in some cases based on dubious fits to da 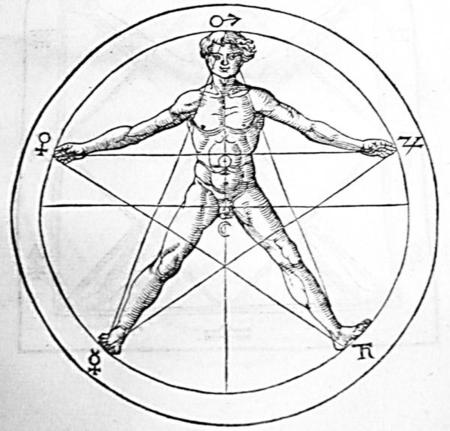 Timeline according to Priya Hemenway:

Phidias (490–430 BC) made the Parthenon statues that seem to embody the golden ratio.

Plato (427–347 BC), in his Timaeus, describes five possible regular solids (the Platonic solids: the tetrahedron, cube, octahedron, dodecahedron, and icosahedron), some of which are related to the golden ratio.

Euclid (c. 325–c. 265 BC), in his Elements, gave the first recorded definition of the golden ratio, which he called, as translated into English, "extreme and mean ratio" (Greek: ἄκρος καὶ μέσος λόγος). See also our article on the Sigillum Die.

Fibonacci (1170–1250) mentioned the numerical series now named after him in his Liber Abaci; the ratio of sequential elements of the Fibonacci sequence approaches the golden ratio asymptotically.

Luca Pacioli (1445–1517) defines the golden ratio as the "divine proportion" in his Divina Proportione.

Michael Maestlin (1550–1631) publishes the first known approximation of the (inverse) golden ratio as a decimal fraction.

Johannes Kepler (1571–1630) proves that the golden ratio is the limit of the ratio of consecutive Fibonacci numbers, and describes the golden ratio as a "precious jewel": "Geometry has two great treasures: one is the Theorem of Pythagoras, and the other the division of a line into extreme and mean ratio; the first we may compare to a measure of gold, the second we may name a precious jewel." These two treasures are combined in the Kepler triangle.

Charles Bonnet (1720–1793) points out that in the spiral phyllotaxis of plants going clockwise and counter-clockwise were frequently two successive Fibonacci series.

Roger Penrose (b. 1931) discovered in 1974 the Penrose tiling, a pattern that is related to the golden ratio both in the ratio of areas of its two rhombic tiles and in their relative frequency within the pattern. This, in turn, led to new discoveries about quasicrystals 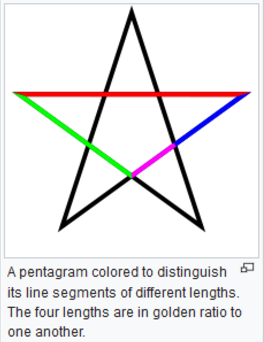 Now you have read this article on The Golden Ratio and its mystic and magical properties, you can now read on further in how we can use this golden ratio if we now wish to know how to conjure an Elemental spirit being into our world.

Where the Greek letter phi ( φ or ϕ) represents the golden ratio. It is an irrational number with a value of: 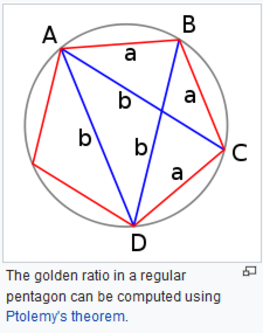